For those of you who don’t really know Margo, you should know she likes to collect interesting rocks and put them in her pockets. On other vacations she has collected soooooo many rocks I’ve wondered how she kept her pants up.   No problem here. Mary and Margo are in search for the perfect shell. There are so many little ones to choose from.  Margo is so busy collecting shells she has NOT picked up any rocks so far on this trip.

Shelling (a.k.a. too much fun to collect rocks) 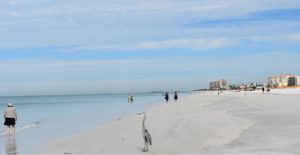 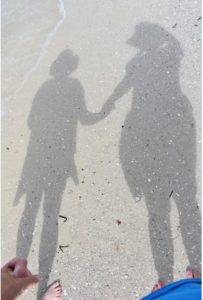 Margo – Clearwater Beach – Margo said the shelling walk reminded her of Ground Hog’s Day – Look at the shadows!  We continued our conversation on how Alexandria, MN and Clearwater, FL were alike. The both have jet skis, nice weather, pigeons, sea gulls and skate boards…… Broken conch shell structures were compared to the structures in New York’s Twin Towers. New York has pigeons too.

Margo – Clearwater Beach – Life Guard Station. Imagine that….. Margo said it was too cold to swim. Mary’s going to make her before she leaves! (Ugh. That means Mary is going with her. Stay tuned to another day.)

Margo wanted me to share this YouTube video I’m Disco the Parakeet and I know it. It is one of her favorites.

Our start of the day was a road trip to Tarpon Spring, about 17 miles north of  Clearwater Beach. Unfortunately Mary and Margo’s time in Tarpon Spring was cut short because Mary forgot her wallet at the boat.  They did have a good time looking around at everything though.

We discussed a variety of topics on our road trip, but mostly how Florida and Alexandria are alike. For example, you see monster motor homes in both places, they both have Walgreen stores, the towns have Christmas decorations …. 🙂  New York was tossed in for comparison too.

Upon return, a quick nap and then to the BEACH and feed the birds.

Tarpon Springs was named for the fish found in abundance in nearby waters. But it also is known as the “sponge capital of the world”.  The sponge industry was founded in Tarpon Springs in 1880s.  In 1905, John Cocoris introduced the technique of sponge diving to Tarpon Springs by recruiting divers and crew members from Greece. It industry soon became one of the leading maritime industries in Florida.

In 1947, a red tide algae bloom wiped out the sponge fields in the Gulf of Mexico, causing many of the sponge boats and divers to switch to shrimping for their livelihood. Eventually, the sponges recovered, allowing for a smaller but consistent sponge industry today.

Tarpon Springs has the highest percentage of Greek Americans of any city in the US.

Pronoia : The opposite of paranoia. It’s the sense that the world’s out to help you and everything’s coming up roses.

Margo, did you have to bring cold weather with you from Minnesota?  It’s 51 degrees and 18 kts wind.

The weather didn’t stop Margo and Mary. They spent the day walking south on the beach and looking for shells.

At the end of the beach they walked back north wandering through the shops and taking pictures with almost every dolphin along the way.

After an afternoon nap they were back at it again and Dale joined them. The sunset was at 5:33 pm.  We wandered down the street in and out of shops and then out to the beach for sunset.

And then back to Frenchy’s for supper.

Back to the boat!

A sea turtle can not retract it’s head into its body.

Loggerhead sea turtle nests are the most commonly found nests on the beaches of Florida’s gulf coast. On average a Loggerhead sea turtle lays about 100-120 eggs at one time.  The temperature of the sand around a nest can determine whether hatchlings will be males or females. Oh gosh!

Margo had a long travel day getting to Clearwater Beach. She got up at 6:00 am after a restless night sleep because she was so excited about the vacation. She started her trip by taking the Alexandria Rainbow Rider shuttle to Perkins for a great breakfast. All of us know how important a great breakfast is. (Our mother’s told us). From there at 9:00 am Margo caught Executive Express to the MSP airport where Jake met her. When Jake helped Margo get her ticket he also got a non-ticket security pass so he could escort her to her gate. The two of them cleared security and had some lunch.  I even heard some rumors the 2 of them were spotted dancing by the elevators!

Mary and Dale were about 300 feet from the gate when found Margo headed towards the baggage claim with a new found friend from the plane ride.

We were in the car with baggage collected before 8:07 pm, the scheduled arrival time her plane.

We went to Frenchy’s in Clearwater Beach for their $1.75 taco special. Dale had 2 fish (Grouper / Snapper), Mary had 2 shrimp and Margo had 1 of each. 🙂

Then to the boat and to bed at 9:30 pm!  Unpacking is saved for tomorrow.

About 20 million people travel through the Tampa International Airport each year, about 250 departures daily.

Tampa International Airport prides itself on ‘sustainability’: alternative fuel vehicles, recycling, energy and water use reduction.  Approximately 40% of the Airport’s vehicle fleet runs on alternative fuels, such as compressed natural gas, electric, and hybrid engines. This has saved more than 517,000 gallons of gas since they first went into service in 2012.

We are docked at Clearwater Beach Ground Zero for the next week. Mary’s sister Margo is coming tomorrow, Tuesday, for a week.  Not that we haven’t been tourists for the past week, we are really going to be tourists for the next week while Margo is here. Mary might not be posting daily and if she does it there will be a lot Margo photos for the family to check out and she can show her friends when she gets home.

New Digs for the next week

American counties directly on the ocean shoreline account for less than 10% of the continental U.S. land mass. Yet, about 40% of our population lives in those counties.

Wish you were here?

We wish you were too.  Just a reminder…. You can copy the above coordinates and past them in Google maps to see exactly where we are at the end of day location.

We qualified (planned) our route and set off to an anchorage across the bay. Charts typically identify mean low tide so there should be enough water. We draft about 3.9.  The depth finder was suddenly reading 3.2 but we weren’t churning any sand or mud. The depth finder at the stern read 1 foot. Ugh!  We’ve never calibrated our depth finder but NOW felt like a good enough time to do so.  With the engine in neutral Dale stuck a docking pole into the water off the swim deck.  5 Feet!  Looks like we have about 1-2 feet of grace in our depth finder readings. WHEW. 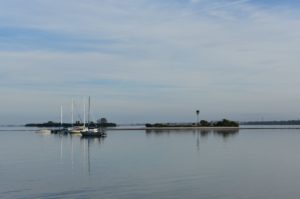 Out and About to the Vikings Game

The Frenchy’s marina is across the street from one of Frenchy’s restaurants.   When we returned to the dingy the marina was locked and chained for the night. We could not get to our dingy!!!!  Panic stricken we returned to Frenchy’s  restaurant to see if there was any one who could assist. WHEW! The manager was just closing up and had a key. She graciously walked us over to the marina and let us in.

Clearwater holds the Guinness Book of World Records for most consecutive days of sunshine at 768, an average of 361 days per year. Recent years since 2015 have somewhat cut back on this record.

Our mission for the day was to bike over to the Clearwater Beach side and check out possible anchorages for tomorrow night.

Live is all about choices. Some good ones and some not so good.

The 5 mile bike ride back to our marina was uneventful but Mary did to to bed a little earlier than usual.

Aquamarine is the gemstone of the sea, and it’s supposed to be a cherished object for mermaids. In addition to being treasure, people once believed this gemstone came from the tears of mermaids, and it used to be thought had the power to protect sailors when they were at sea, or when they fell into the water.

I feel like I’m on vacation! Another slow and lazy day. The weather was beautiful. Today we took our bikes north to Dunedin. The name “Dunedin” comes from Dùn Èideann, the Scottish Gaelic name for Edinburgh, the capital of Scotland.

Happy Thanksgiving! I hope all of you connected with friends and family, enjoyed a delicious meal and counted your blessings.  Dale and I enjoyed a simple day together, a far different experience from the huge family Thanksgivings we had at our home in Lake Elmo. There was one year we topped out at 49 for dinner and 51 for desserts.  Today it was just the two of us.

We miss and love your all. Plan on us for next Thanksgiving!

We headed south on our bikes to Belleair Beach Causeway, the next bridge down. Our path first took us through the Scientology version of the ‘Vatican City’ in downtown Clearwater. It was strangely quite. It appeared the 100’s of uniformed worker bees that are usually walking around had the day off.

From the Belleair Beach Causeway bridge we headed west across to Sand Key, north across the Gulf Blvd Bridge (entrance to the Gulf) to Clearwater Beach and then east back the marina we are at.

You know those post-Thanksgiving Dinner stomach sounds? There is a term for that:
Borborygmus – a rumbling or gurgling noise made by the movement of fluid and gas in the intestines.

Mary is looking for new crew. Must like chocolate. Tom ate M&Ms with Mary, Ray – Snickers bars, Bruce – Dove chocolates.  Anyone like Butterfingers?

We had planned to leave the Clearwater Harbor Marina today around 11:00 am.  The weather was so rough we asked the Harbor Master if we could stay past the 11:00 am checkout time in hopes the water would lay down later in the day.  It got worse. Argh! We paid for another night…. and at that point another $40 would hit the weekly rate. Good news/Bad news. The Harbor Master graciously adjusted our bill so we got the weekly rate (saved us about $200).  We are now here till Sunday morning.     ☹No anchoring out but we do have electricity.

The bikes come back off the boat tomorrow.

Less than exciting things to do…

This is the MOST expensive laundry room yet at $2.00 per load. Most are $1.50 or less.  Our washer at the moment is not working. Yet another item on the boat to fix.

Avidazen. German phrase meaning until we meet again, used as a farewell.