Harley Davidson is celebrating its 115th Anniversary Labor Day Weekend in Milwaukee. The marina is packed and we are about .5 miles away from the celebration event. Blasting music, Harley rumbles, feral helicopters, airport takeoff/landing flight path and dock tails. It will not be a silent night.

We walked up to Glorioso’s Italian on Brady Street for groceries. Gloriosos is a must for any Milwaukee stop over. https://gloriosos.com/  The Brady Street Experience is part of the 115th Anniversary event.  It feels like a very low keyed Sturgis.

Having our boat in the marina this weekend would be sort of like having it parked on Snelling Avenue during “Back to the 50’s” car show weekend or the State Fair.

Good thing we are becoming sea dogs. Waves were 2-3 feet and building for today’s trip. Bring it on!

Brady Street Experience – the party is picking up

Imagine that!  A clear horizon 360 degrees view enroute to Port Washington, WI. The breakwater on the south side the harbor entrance had about a dozen fishermen on it as we departed this morning.  There were also about a dozen fishing boats immediately outside the entrance and in the channel. Approximately half of them were charter fisherman and half private. Probably fishing for walleye.

We had to slowly maneuver our way out to deeper water as the Sheboygan River swollen from all the rains washed a lot of garp, branches and trees into Lake Michigan.  We finally got clear of the garp about .75 miles out. Tom compared it to the Sargasso Sea.

The closest bar in Port Washington was 30 feet from the end of our dock. We walked past it. (to another) Shake of the day!

2 for 1 Looper Special.  Buy one night get one night free.  How could we pass that up? 8:00 am – Star Spangled Banner was played over the harbor by the Coast Guard and the flag was raised.  Off on the bikes for another adventure!  Mary was still having problems with her bike so she got it tuned up at Johnnie’s Bike Shop. Really eclectic little shop run by Patti, the daughter of the original owner.  Definitely a 5 star bike shop. (sorry, forgot to take pictures)

Grand Sturdy 430 – Rope rub rail in a channel, tightened in by a stainless steel turnbuckle.

We could actually see the Manitowoc Lighthouse for minutes leaving the harbor!  It didn’t last for long though. Fortunately the heavy fogged stayed with in a couple miles of shore so we traveled outside the fog bank. Just to keep us on our toes, water was a little rough.  The day ended as the past two has with a kickass storm and tornado sirens.  The fog horn is blowing in the background.

Waves were 1 to 4 feet with a few 5+ footers mixed in. It isn’t the size of the that really determines the splash, it’s more the space between them. If the distance is great enough the boat just kinda slips through them. A few of them the splash washed over the deck.

As expect last night was quite a storm.  Winds gusts in the marina were measured at 59 mph. It was extremely foggy again today so we opted for another day in the marina. Another big storm is expected tonight.

We biked up the Ice Age National Scenic Trail through Two Rivers, through Point Beach State Forest to Rawley Point Lighthouse. All of us agreed that the bike ride through Point Beach State Forest was the best bike path we had ever been on; deciduous forest, coniferous forest, natural dunes and lake shore.   (Make sure you don’t skip the picture at the bottom of this entry.) 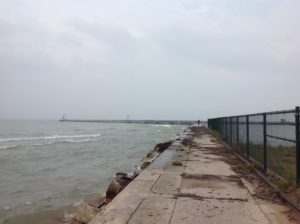 We met this older gentleman by the shore pondering whether he was going to go out to the end of the pier today. He said he did it most every day weather permitting. He decided to go because we were going out. It was a bit of a wet ride. An occasional wave broke over the rocks.

We got to Two River about 1:00 PM so on a fluke we decide to trek out to Rawley Point Lighthouse.  Riding on the Ice Age National Scenic Trail through Point Beach State Forest was definitely one of the highlights of our Loop so far.

Waiting out the Weather

A thunderstorm rolled through on our way home.

We left Sturgeon Bay about first light with light, early morning fog that was supposed to burn off by 9:00 AM. The fog never lifted.

Occasionally we ran into groups of 5-12 fishermen. The radar really helped out locating and working through the groups.

This was the only color we saw all day.

Bike out to the Lighthouse

Our bike ride was cut short.  A woman stopped us on the street and told us to seek shelter. A storm was coming. It came. Flash and Crash!

From the Poet Laureate

The route we drove the boat today.
Was to Manitowoc from Sturgeon Bay.
We set out early, just after dawn.
Got out on the water and all was gone.
The water was flat and smooth as ice.
But the lake put on its cloaking device.
Fog turned the world into white and gray.
Without electronics, there’d been no way.
Spending 5 hours without a horizon
Is an unusual world to keep your eyes in.
We’re at the dock in manitowoc feeling the boat rock.
T storm is kicking our ass as we speak

Still at Skipper Bob’s Quarterdeck. Waves are Lake Michigan are predicted to be at 2-5 feet.  We’ve seen a 3 foot and not looking forward to a 5 foot.

Aftermath of the Free Marina Sponsored Supper.
Skipper Bob’s sponsored a free supper for the marina. Smoked pork and gourmet hot dogs, corn on the cob and everything else including beer and wine.  HA!  A slip here runs about $70.  I think the 3 of us more broke even here with free supper and beverages.

Back at Skipper Bob’s Quarterdeck

While sitting in the marina club room watching the news, another patron ambled by and under the his breath commented “Wow! It’s nice to see someone watching CNN news. It’s not seen around here very often.”  in Trump and Governor Scott Walker Country

The rain isn’t so much of a problem, but the wind is!

Mary managed to fall over on her bike while standing. She decapitated a finger nail and has road rash up the arm.

From the Poet Laureate (Tom)

Ok its been  while, and we’re still havin fun.
But ive been shirking my duties lately, so heres another one.
A few days back, we grabbed a place, at Skipper Bobs, in Sturgeon Bay.
It was pretty nice there, and we liked it, so we decided, that wed stay.
Then went north, to Baileys harbor, on the hook yesterday.
Cupboard emptying waves, brought us back, to Skipper Bobs again today.
Got frisky and took a bike ride, out along the western shore.
Every time Dale, says its not far, its always, miles more.
Busting a derby move, on a guardrail,  in the state park Potowatamee.
We feared fair Spiderwoman, had given herself,  at the very least, a lobotomy.
Seeing her do this, i admit, scared the hell out of me and Dale.
But alas, the iron maiden,  only managed, to brake a nail.
Now we’re back, hunkered down, wind and rain is on its way.
Party here tomorrow, with free booze, when I tell them, bet we stay.
–
–
Editorial Note1:  Yes Thomas, I will keep my promise
not to fall of my bike again.
Editorial Note2:  We are staying another night. HA!

HaHa.  Notice day-of-week was added to the first line of the entry.   Totally loosing track of date and time!  I need to add a bit more structure in my life. We returned south Sturgeon Bay. There is a pretty significant front coming through and we want to be in a marina for that.

For those of you watching GPS coordinates yes, we red right returned to the exact same slip at Skipper Bob’s Quarterdeck Marina we had earlier in the week. The wind is 15-20 nts, waves 1-3 and building.  A big storm is coming in later tonight/tomorrow.  Didn’t feeling like testing the anchors tonight.

Power Supply (or not)?

We are still fighting with the power supply used to drop/lift the dingy. Although it dropped the dingy last night and lifted it this morning we are not confident in the battery holding a charge. Super charging it again tonight and will recheck tomorrow morning.

Arrival at the Dock

Took 4 people to help us dock due to the winds!   All hands on deck! No pictures too busy!

August 22 is my mom’s birthday she would have been 88 years old today.  She was a gracious and classy lady. If you asked her to go someplace she NEVER said no.

Last June Anita, Mary and I were in Door county we stayed in Sturgeon Bay for 2 days and toured Washington Island. That was to be her last big trip and she enjoyed every minute. She rode shotgun in the car and did not close her eyes even once for a nap!